The franc is the official currency of Switzerland, subdivided into 100 cents (“rappen” in Swiss-German). Also, this is also the currency of Lichtenstein.

Prior to 1798, around 75 entities minted coins in Switzerland, resulting in 860 different types of currencies in circulation, with different values, denominations and monetary systems. Some of these currencies were thalers from Bern, Zurich, Basel and Geneva or the florin of Fribourg, among others.

In 1798 the Helvetic Republic introduced a new monetary system based on the thalers from Berna, divided into 10 batzen or 100 rappen. The Swiss franc equalled to 6 grams and three quarters of pure silver or 1.5 Fr. This franc was issued until the end of the Helvetic Republic in 1803, but it was used as a model for the currencies of many cantons in the reformed Swiss Confederation.

Even though around 22 cantons and semi-cantons issued their own currency between 1803 and 1850, less than 15% of the money in circulation in Switzerland in 1850 was produced locally, being the rest of it foreign currency, mainly from the money that mercenaries brought back home. Also, some private banks started to issue the first banknotes, so they ended up with around 8,000 different coins and banknotes circulating at the same time, which made the monetary system pretty complex.

The new Federal Constitution in Switzerland in 1848 specified that the Federal Government would be the only entity authorised to issue money in the country. Two years later, the first monetary federal law followed, approved by the Federal Assembly on the 7th May 1850, which introduced the franc as monetary unit in Switzerland. The Swiss franc was entered into circulation at the same time that the French franc.

In 1865 France, Belgium, Italy and Switzerland created the Latin Monetary Unit, where they agreed to fix their national currencies based on 4.50 grams of silver or 0.290322 grams of gold. During the decade of 1920 the Union started to disappear and agreements ended officially in 1927, but the Swiss franc kept the same exchange rate until 1936, when it suffered its only devaluation on the 27th September during the Great Depression. The currency devaluated a 30% after the devaluations of sterling pound, the United States dollar and the French franc. In 1945 Switzerland joined the Bretton Woods Agreements and fixed the franc to the dollar in an exchange rate of 4.30221 CHF per dollar. 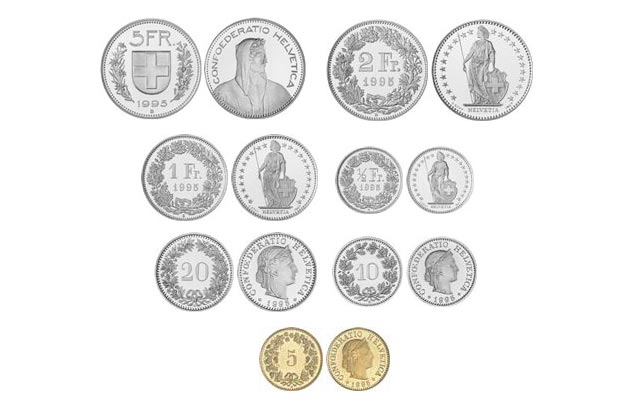